Austrian Airlines Given Top Rank in the World Airline Awards 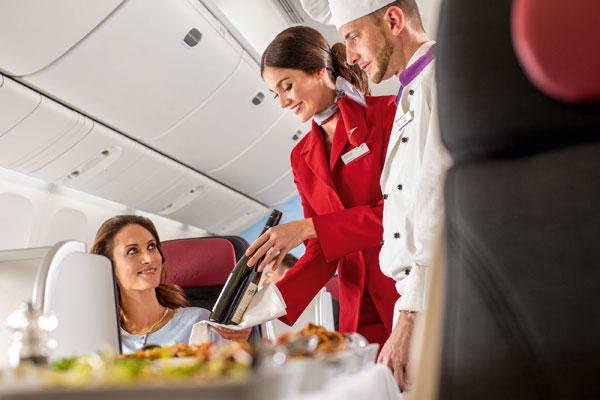 Austrian Airlines once again achieved top ratings in the World Airline Awards 2013. It was ranked once again as one of the best airlines in Europe, improving its position in the European rankings from eighth in the previous year to sixth this year. Austrian Airlines also placed fourth and thus among the top five as the Best Western Airline in Europe. Thus it also improved in this category compared to its prior-year fifth place rating. Austrian Airlines also placed fifth and thus among the world’s five best again in the category Business Class Catering thanks to its exclusive DO&CO service on board. This once again demonstrates that the premium culinary offering on board with the gourmet food, the Viennese Coffeehouse Service and professional chefs on board is among the very best.

In the overall ranking of all global airlines, Austrian Airlines was rated 33rd in the world. This comprises an improvement from the 39th place achieved in the previous year. “We are pleased that our customers evaluate us favorably. This shows that we are on the right path with our resolute product and quality improvement. We understand the results of the award as a mandate to improve even more“, says Bernd Hartweger, Vice President Product Management and Marketing.

Austrian Airlines is working on a whole series of product and quality improvement measures. It was only two years ago that the medium haul aircraft were equipped with the new Europe cabin featuring new, modern leather seats and completely new interior decorations. At present the conversion of the long haul aircraft is being implemented. The airline is investing more than EUR 90 million in order to equip all its long haul aircraft with new, modern Economy seats, a new in-flight entertainment system and new Business Class seats which can be converted into fully flat beds. The first converted aircraft has been in operation since January 2013. The conversion of the remaining aircraft is taking place on a step by step basis. Due to the fact that the survey for the Skytrax ranking already began six months beforehand, namely in July 2012 (until May 2013), the new product is only partially being taken into account. “As our current customer surveys indicate, the level of satisfaction of Austrian Airlines passengers in Business Class as well as in Economy Class has significantly increased in recent months with the conversion of our long haul aircraft”, Bernd Hartweger explains.