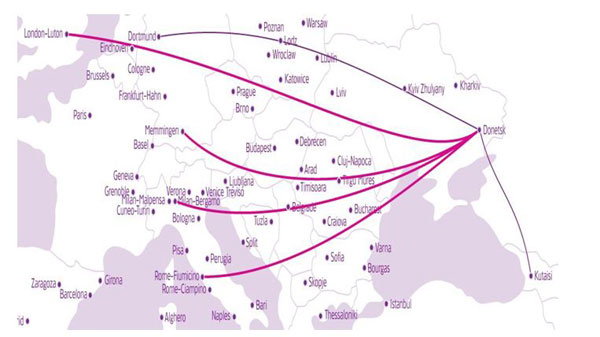 Wizz Air Ukraine, the first low-cost, low-fare airline in Ukraine, announced today its second Ukrainian base in Donetsk which will open on 1 October with one based new Airbus A320 aircraft. In addition to the existing Kutaisi and Dortmund routes, Wizz Air announced four new routes to London Luton, Milan-Bergamo, Munich Memmingen and Rome Fiumicino.

The popular Kutaisi route will grow to 5 weekly flights from 3rd October. This represents a fleet investment in Donetsk of aprox. US$ 80m (at list price) for Ukraine’s only low-cost airline and will grow passenger traffic at Donetsk airport to 275,000 in the first year, supporting over 250 new jobs. Seats on the four new routes are already on sale on wizzair.com, starting from as low as UAH 399.

“I am thrilled today to announce our second base in Donetsk. Wizz Air Ukraine has created and grown low cost air travel in Kiev to over 600,000 yearly passengers and we expect to carry up to one million passengers in both bases, Kiev and Donetsk, over the coming 12 months. Our commitment to the Ukraine is clear: we deliver reliable air traffic operations with very low fares to the consumer. Our passenger growth benefits those airports that offer lower costs and we welcome Donetsk Airport as the second base airport in Wizz Air Ukraine’s network. As long as low costs are offered, Wizz Air Ukraine expects to grow further in Kiev and in Donetsk.” – said Akos Bus, General Director of Wizz Air Ukraine.