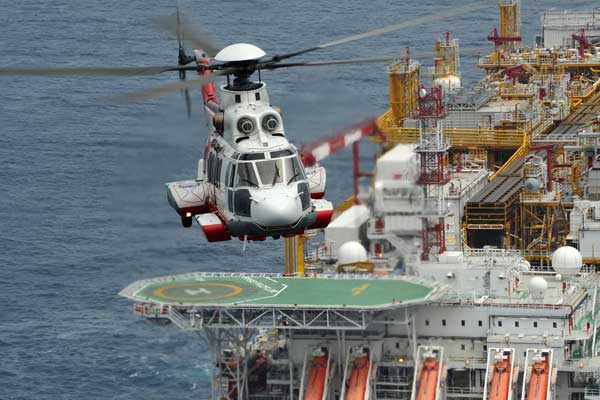 The deliveries of three new EC225s to customers in Vietnam and Malaysia further expands the fleet of Eurocopter’s workhorse helicopter deployed worldwide in demanding operating conditions of the offshore oil and gas industry.

“We are committed to collaborating closely with our customers to ensure that the EC225 remains an important asset for oil and gas operators. We thank customers such as VNHS, MHS and Awan Inspirasi for their continued confidence in the EC225,” said Eurocopter CEO Guillaume Faury.

VNH South accepted its third EC225 this month in a handover ceremony at Eurocopter’s production facility in Marignane, France. With the expected delivery of its fourth unit next year, the company will have a total of 10 Eurocopter rotary-wing aircraft in its inventory, consisting of four Super Puma family EC225 and four AS332 L2 helicopters, along with two EC155 Dauphins. VNH South benefits from the close support of Eurocopter’s South East Asia subsidiary based in Singapore.

VNH South began oil and gas operations 27 years ago with the SA330 Puma as its first helicopter. Since then, the company has increased its fleet with more acquisitions to meet the expanding business needs, including purchase of the four EC225s in the past six years. To date, VNH South has logged an impressive 54,000 flight hours with its Super Puma fleet.

“Eurocopter has been a trusted partner through the years, providing products of great performance and high standard of support,” said Tran Dinh Nam, the Commercial Director of VNH South. “The new aircraft will no doubt enhance the capability of our fleet in carrying out the demanding offshore missions.”

Awan Inspirasi Sdn Bhd (AISB) of Malaysia has similarly taken possession of its latest EC225 from Eurocopter in France. The helicopter will now be transferred to the Eurocopter Malaysia subsidiary in Subang, where it will be painted and readied for service entry with Awan Inspirasi in September.

Awan Inspirasi currently has three EC225s in its inventory – including a leased aircraft, which will be replaced by the newly-delivered helicopter. This operator benefits from the new Eurocopter Malaysia training center in Subang, which includes a state-of-the-art EC225 full-flight simulator.

More: Delta to Launch Nonstop Service between Newark and Paris

“Our company has a unique know-how as the only Malaysian service provider operating in deep waters,” said Datuk Hanif Darimi, the Chief Executive Officer of Awan Inspirasi. “We were the first to introduce the EC225 in the Asia-Pacific region, as it answers our needs perfectly. It has been a strong asset for Malaysia’s deep-water exploration and oil and gas operations.”

For MHS Aviation, the company’s fifth EC225 will be handed over in Malaysia during early July, further broadening the largest fleet of this helicopter type in Malaysia. MHS purchased its first two EC225s in 2009 and quickly increased the inventory based on the helicopters’ highly successful service. MHS Aviation’s inventory today includes a total of 14 Eurocopter-built aircraft, composed of the EC225, AS355, AS332 and AS365 types. Its acceptance of the latest EC225 closely follows the delivery of its fourth EC225 just last May.

“Eurocopter helicopters have served us well over the years. This latest aircraft will enhance our fleet and strengthen our offshore operations and offerings to customers,” commented MHS Aviation CEO Ma’som Mahadi.

The EC225 is a high-performance heavy twin-engine helicopter in the 10-11 metric ton category. It is the latest version from the Super Puma family, incorporating modern technologies. With a seating capacity of up to 19 passengers, the EC225 is recognized as the reference for offshore and passenger transport missions, as well as search and rescue (SAR) operations.