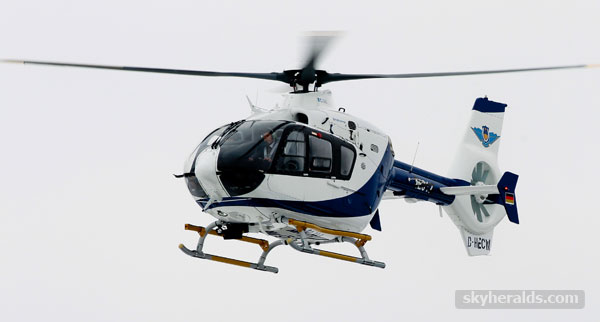 Eurocopter’s dedication to the Chinese helicopter market – and its ability to respond to China’s evolving rotorcraft requirements – will be the company’s focus at this year’s China Helicopter Exposition.

Leading Eurocopter’s presence during the September 5-8 event in Tianjin will be Group CEO Guillaume Faury, who will be joined by Norbert Ducrot, the newly-named CEO of Eurocopter’s China subsidiary.

“With Eurocopter’s more than 45-year presence in China, we are fully dedicated to helping the country develop its helicopter market and capabilities,” explained Ducrot. “In addition to providing a modern helicopter family to meet the needs of this growing market, we will continue to expand our footprint to establish a network of in-country support centers, including training services.”

At the 2013 China Helicopter Exposition, two members of Eurocopter’s comprehensive product line are to be displayed: the single-engine, light EC120 and the mid-sized, twin-engine EC135.

These two rotorcraft types are in widespread service across China, used in applications that range from police operations and emergency medical services, along with rescue and salvage duties, to business aviation, commercial airlift and utility missions.

A Eurocopter focus at the China Helicopter Exposition is its EC135, which continues to gain popularity with Chinese operators.

Displayed at the Tianjin event will be an EC135 configured for on-shore rescue, outfitted with equipment that includes a hoist.

The latest delivery of this helicopter type was the EC135 P2e for Wuhan Police in July – a multi-role helicopter equipped with an electro-optical FLIR (forward-looking infrared) camera, searchlight, loud speakers, rappelling ropes and hoist.

The 16 EC135s already in service across China represent this country’s largest fleet of light, twin-engine rotorcraft, with their users benefiting from the helicopter’s cabin size and interior configuration flexibility. They are utilized by police forces in Shanghai, Guangdong, Chongqing and Wuhan; as well as in emergency medical airlift missions; rescue operations and for business aviation.

Eurocopter also will bring an EC120 to the China Helicopter Exposition, underscoring this rotorcraft’s use in applications that include Chinese commercial utility and private aviation flights. A total of 14 EC120s are operating in China today.