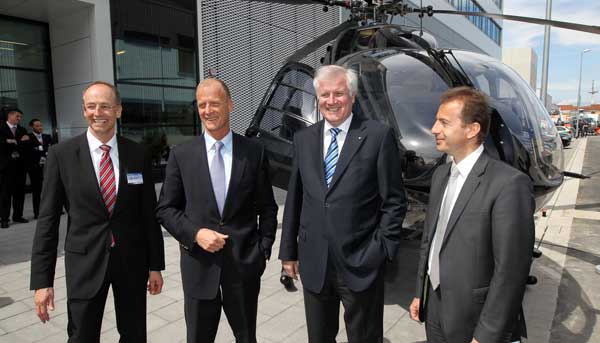 The facility, which provides workspace for some 900 employees, offers complete system capability for the global helicopter market leader’s production activity at its German location – a key aspect of the company’s worldwide innovation strategy.

This new development center allows Eurocopter to manage the entire life-cycle of its helicopters at one German location, covering all aspects from research, development and prototype construction through manufacturing and final assembly – along with training, maintenance and product improvement. Approximately 900 employees are moving from an existing operation in Ottobrunn near Munich, bringing the Donauwörth location’s total workforce to a staff of some 6,500.

“Today’s Systemhaus inauguration is a decisive step forward in Eurocopter’s industrial strategy,” explained Eurocopter CEO Guillaume Faury. “By gaining the full system capability to develop, manufacture and maintain helicopters in Donauwörth, we generate remarkable advantages in terms of product and technology cycles. It’s a long-term investment with far-reaching impact that ultimately serves both our customers and enhances our competitiveness.”

“Concentrating development, manufacturing and maintenance in Donauwörth not only reinforces Eurocopter’s own expertise and boosts the company’s performance, it also strengthens the en-tire Bavarian aerospace industry,” said Prime Minister Seehofer during his visit to the site. “In the race to the future, the key thing is to always be faster, better and more innovative, and Eu-rocopter is showing us how it’s done. The new Systemhaus is a pure expression of high-tech in-novation, and it is a prime example of what Bavaria has to offer as a location for the aerospace sector.”

EADS CEO Tom Enders said the Systemhaus is part of a series of major investments that EADS has pursued in Germany – and particularly in Bavaria. “Premium AEROTEC has officially opened a new engineering center in Augsburg; Astrium is building a new engine production facil-ity in Ottobrunn; and a planned research campus also is taking shape in Ottobrunn,” he said. “This is all good news for the region and for EADS: We are building on Germany’s long tradition of aerospace strength and laying the groundwork for a consolidation of the Group’s leading posi-tion in the market.”

Along with office space at Donauwörth, the new Systemhaus building incorporates state-of-the-art testing and research facilities, which include simulators, avionics trainers, laboratories, test centers and a prototype shop. This new center for innovation also is home to the System Sup-port Centre (SUZ) for the German armed forces (Bundeswehr) helicopter fleet, including the NH90 and CH-53 transport helicopters, and the Tiger attack helicopter Bringing design and production physically closer together makes it possible to achieve much better networking between individual specialist areas at the Systemhaus. Interpersonal ex-changes and increased reactivity are encouraged by galleries, central meeting rooms and short-er access ways that lead through an atria. Facilitating the working environment is a paramount consideration for Eurocopter’s new X9 helicopter development program, which will be conducted primarily in Donauwörth.

Since the start of the Systemhaus’ construction in July 2011, Eurocopter has invested some 100 million euros in the development center project. With a total floor space of 30,000 square me-ters, the building was the region’s biggest construction project.

In view of the growing workforce at Eurocopter’s site in Donauwörth, it was decided to include a new staff restaurant in the expansion measures. Additionally, a day care center with capacity for approximately 50 children will be set up in the immediate vicinity of the plant. Meanwhile, the on-site combined heat and power plant that Eurocopter is building will meet almost half the compa-ny’s future energy needs in Donauwörth.

A project comparable to the Systemhaus is being realized at the company’s Marignane location, close to Marseille in the south of France. There, too, Eurocopter is building a new development center as part of its strategy of sustainable innovation and technology.