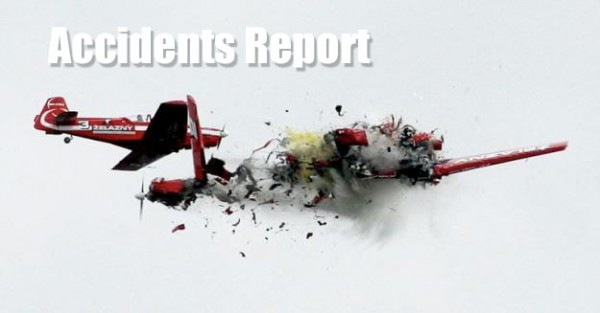 Medevac King Air Goes Down in Alaska
Hawker Beechcraft King Air B200, Atqasuk, Alaska, May 16, 2011–Icing is suspected in the crash of the turboprop twin, which went down while en route to Atqasuk Airport for an early-morning medevac pick-up. The King Air was substantially damaged when it crashed approximately seven miles west of the village of 230 people. The three crewmembers suffered minor injuries.

Turboprop Twin Makes Golf Course Landing
Hawker Beechcraft King Air E90, Dorset, UK, May 18, 2011–The King Air was substantially damaged when it made an emergency landing on a golf course soon after takeoff from Bournemouth Airport. According to initial reports, the U.S.-registered airplane suffered a dual engine failure. The two pilots were uninjured. The UK’s Air Accidents Investigation Branch is investigating the accident.

Medevac Turboprop Crashes in India
Pilatus PC-12/45, Faridabad, India, May 25, 2011–The turboprop single was en route from Patna to New Delhi carrying a patient for treatment when it crashed in a suburb 15 minutes from Delhi Indira Gandhi International Airport. The Indian-registered aircraft, operated by Air Charter Services India, was encountering strong wind at the time of the crash, according to authorities. All seven people on board were killed, along with three people on the ground. The PC-12 was destroyed by the crash and subsequent fire. The Indian government’s Directorate General of Civil Aviation is investigating the accident.

Citation Suffers Trim Control Failure
Cessna Citation 560XL, Abbeville, La., April 8, 2011–On a positioning flight from New Orleans to Houston, the crew was forced to make an emergency landing at San Antonio International Airport after noting an “abnormal” feel in the Excel’s flight controls. After the pitch trim annunciator sounded, the pilot disconnected the autopilot and felt the aircraft’s nose pitch up. Use of the electric and manual trim had no effect, but the pilot was able to lower the nose using increased forward pressure on the control column. The Citation landed without further incident, and subsequent examination of the elevator trim system showed that a cable had broken in two parts. The two ATP-rated pilots were not injured.

King Airs Battered by Turbulence
Hawker Beechcraft King Air C90, Camden, S.C., May 27, 2011–The turboprop twin was substantially damaged when it encountered severe turbulence during a flight from Charleston International Airport (CHS) to Newark-Heath Airport in Newark, Ohio. The aircraft endured two minutes of moderate to severe turbulence, after which the pilot elected to continue to the destination. The aircraft was flown back to CHS the following day, where close examination of the airframe revealed wing spar damage at the fuselage attach point and wing skin wrinkling.

Hawker Beechcraft King Air A100, Gray, Tenn., June 15, 2011–While flying in smooth IMC at an altitude of 20,000 feet, the King Air experienced increasing turbulence and rime ice before entering an uncommanded left roll and dive. The crew reduced engine power to idle and was able to recover to straight and level flight at 8,000 feet. Due to “flight control instability” the pilots diverted from their Wichita destination to Tri-Cities Regional Airport in Blountville, Tenn., and landed without incident. Examination of the aircraft revealed the outer one-third of the left elevator had separated in flight, while the right elevator was deformed downwards. The horizontal stabilizer bulkhead frame was fractured and the airframe itself experienced several areas of deformation.

VLJ Damaged in Gear-Up Landing
Eclipse Aviation EA-500, Nome, Alaska, June 1, 2011–While landing at Nome Airport at the conclusion of a Part 91 flight from Ugolny Airport in Anadyr, Russia, the twinjet suffered substantial damage. The pilot told NTSB investigators that he landed the airplane with the landing gear retracted but managed to abort the landing. After a go-around he deployed the gear and landed uneventfully. Subsequent examination of the jet revealed a cracked wing spar. The pilot and passenger were uninjured.

Twinjets Damaged In Runway Departures
Embraer Phenom 100, Sedona, Ariz., May 25, 2011–While landing at Sedona Airport at the end of a Part 135 flight from San Jose, Calif., the light twinjet suffered substantial damage when it exited the end of the runway, struck a fence and traveled down an embankment before coming to rest nearly 400 feet beyond the end of Runway 21. The Jet Suite-operated aircraft was substantially damaged in the accident, and the first officer and one of the passengers suffered serious injuries. The captain and two other passengers were uninjured.

Cessna 525A Citation CJ2, Nashville, Tenn., June 15, 2011–The twinjet was substantially damaged when it overran the runway at John C. Tune Airport at the end of a Part 91 flight from Artesia, N.M. As the aircraft was “high and hot” on final, its student pilot owner turned the controls over to the pilot who continued a steep approach despite “sink rate” and “pull up” warnings from the aircraft’s ground proximity warning system. The Citation landed 1,500 feet down the 5,500-foot-long wet runway, and its antilock brakes could not stop it. The aircraft overran the runway and struck the ILS antennas. The pilot applied full rudder to prevent the CJ2 from heading down an embankment, causing it to spin 180 degrees. The left main gear collapsed, causing damage to the wings. The five people on board were uninjured.

Grand Caravan Crashes in Canada
Cessna 208B, Pukatawagan, Canada, July 4, 2011–The Grand Caravan turboprop single, operated by Beaver Air Services, was destroyed when it crashed during an aborted daylight takeoff from Pukatawagan Airport in Manitoba. According to Transport Canada, the pilot attempted to reject the takeoff from Runway 33 but was unable to stop the aircraft, which continued past the end of the runway. The airplane ended up in a ravine, where it caught fire. One passenger was killed while the pilot and seven other passengers sustained minor injuries.

Norwegian Helicopter Crash Claims Five
Eurocopter AS350B3, Hardanger, Norway, July 4, 2011–While transporting passengers into the mountains, the light helicopter was destroyed when it flew nose first into the ground near its landing point and caught fire. According to reports, there was bad visibility with fog in the area, but the approach area was clear. All five people on board were killed. The Norwegian government is investigating the accident.

Pilatus PC-12/45, Butte, Mont., March 22, 2009–The NTSB determined that the failure of the pilot to ensure that a fuel system icing inhibitor was added to the tanks as the turboprop single was fueled was to blame for the crash, which killed all 14 people on board. It also determined that the pilot failed to divert promptly to a suitable airport when the airplane’s warning systems indicated low fuel pressure (due to fuel icing) that ultimately led to significant lateral fuel imbalance and the pilot’s loss of control of the aircraft while approaching the runway.

During the Part 91 flight from Oroville, Calif., to Gallatin Field in Bozeman, Mont., the pilot eventually diverted to Bert Mooney Airport in Butte after exceeding the aircraft’s maximum allowable fuel imbalance. The left-wing-heavy PC-12 crashed approximately 2,100 feet from the runway and burned.
The aircraft’s flight manual states that an icing inhibitor must be used for all flight operations in ambient temperatures below 0 degrees C to prevent ice from forming in the fuel system. The formation of ice in this instance caused a restriction in the flow of fuel from the left tank, while fuel return lines continued to feed both tanks, exacerbating the imbalance.
The pilot also failed to monitor the aircraft’s fuel-quantity indicator, which would have showed the increasing fuel level in the left tank and the depletion of fuel in the right tank. While the number of people on board (including seven children, four of whom were unrestrained or improperly belted) did not comply with the flight-manual limitation of nine passengers, the Board found that the excess did not affect the outcome of the accident directly.

Pilatus PC-12/45, Hayden, Colo., Jan. 11, 2009–The pilot’s loss of control due to snow/ice contamination on the airplane’s lifting surfaces as a result of his decision not to de-ice before departure was to blame for the accident, according to the Safety Board. The pilot requested that his airplane be pulled from its heated hangar, into heavy snowfall for fueling in preparation for departure from Yampa Valley Airport. The FBO manager suggested that the turboprop single be de-iced after the accumulation of a measurable amount of wet slushy snow, but the pilot declined.
The PC-12 was towed out to the taxiway to prevent it from becoming stuck in the snow, and it took off 22 minutes after it was pulled from the hangar. The pilot made a right turn and announced he was heading to his first waypoint, but the aircraft continued in an ever-tightening right turn until it crashed in an inverted position approximately one mile from the runway. The PC-12’s operating handbook and flight manual states “the aircraft must be clear of all deposits of snow, ice and frost adhering to the lifting surfaces immediately prior to takeoff.” The pilot and passenger were killed in the crash, while the Pilatus was destroyed by the impact and resulting fire.

Cessna Citation 550, Manteo, N.C., Oct. 1, 2010–The Board found that the pilot-in-command’s failure to maintain proper airspeed and to initiate a go-around resulted in the airplane touching down too fast on a short, wet runway and its subsequent overrun.
As the twinjet approached Dare County Regional Airport in deteriorating weather at the end of a Part 91 flight from Tampa, Fla., the PIC told the copilot that they would fly one approach to evaluate the airport conditions and divert if necessary. The PIC also told the copilot that the wind was at 90 degrees to the intended runway, a statement he later amended to investigators to a 20-degree tailwind from the right. When the PIC stated that the airplane was about 300 feet too high above the runway on final approach, neither pilot called for a go-around. The aircraft touched down at a groundspeed of 127 knots (23 knots above Vref) approximately 1,200 feet down the rain-slicked 4,305-foot runway. Despite application of the speed brakes, thrust reversers and brakes, the airplane departed the end of the runway and came to rest in Croatan Sound. The pilot and copilot, along with the five passengers, suffered minor injuries and reached shore by the time rescuers arrived on scene.
Data from Cessna indicated that at its estimated landing weight, the Citation II would have required a landing distance of at least 3,550 feet in wet conditions. That would increase to 5,625 feet for a runway with 0.125 inch of standing water. The two-knot tailwind present at the time of the accident would increase those margins to 3,798 feet and 6,356 feet of landing distance, respectively.
According to the NTSB, the copilot’s failure to monitor the approach adequately and call for a go-around, along with the flight crew’s lack of proper crew resource management, were contributing factors in the accident.