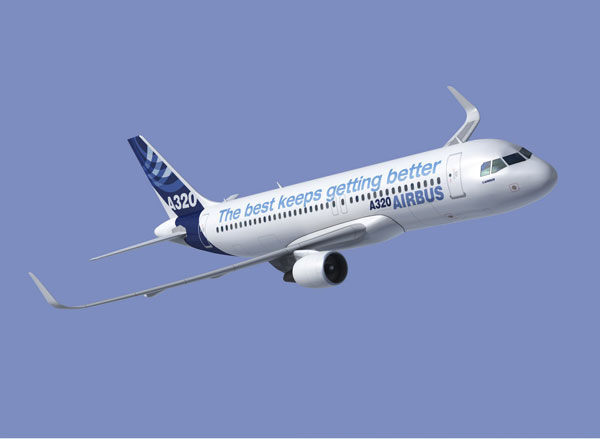 At a crewmember event today at its base at New York City’s John F. Kennedy International Airport (JFK), JetBlue Airways unveiled the first of its Airbus A320 aircraft to be outfitted with Sharklets. The aircraft – registration number N821JB – is also the first of any North American airline to feature the fuel-saving structures. Sharklets are newly designed wing tip devices that improve the aerodynamics of Airbus aircraft and significantly cut fuel burn and emissions by up to four percent.

“The addition of Sharklets to our A320 fleet creates more fuel efficiency and allows us to be a greener airline,” said Rob Maruster, JetBlue’s Chief Operations Officer. “As the world’s first carrier to perform a production retrofit to an A320 aircraft, the project also speaks to JetBlue’s history of innovation and being on the leading edge of the industry.”

“When JetBlue was born, it entered service with an efficient all-Airbus fleet and – since day one – has been an industry leader,” said Barry Eccleston, Airbus Americas President and Chief Executive Officer, who spoke at today’s event. “The fact that they are the first North American airline to fly with Sharklets demonstrates again their focus on the efficiency of the fleet benefiting their customers, the environment, and the airline’s own bottom line. Plus, the Sharklets look really sharp!”

Sharklets are an option on new-build A320 Family aircraft and offer operators the option of an additional 100 nautical miles range or increased payload capability of up to 1,000 pounds. Sharklets are standard on all members of the A320neo Family. In the case with the JetBlue aircraft unveiled today, the aircraft was produced with a wing structurally ready to accept the Sharklets that were retrofitted with support from Airbus at JetBlue’s JFK facility.

JetBlue is known for its award-winning service and free in-flight entertainment, as well as low fares and ample legroom for its passengers. JetBlue serves 75 cities with 750 daily flights. JetBlue currently flies a fleet of 127 Airbus A320 Family aircraft, with another 86 on backlog. The airline will take delivery of its first of 30 A321s later this year.

The A320 Family is the world’s best-selling and most modern single-aisle aircraft Family. To date, more than 9,000 aircraft have been ordered and more than 5,400 delivered to more than 380 customers and operators worldwide.