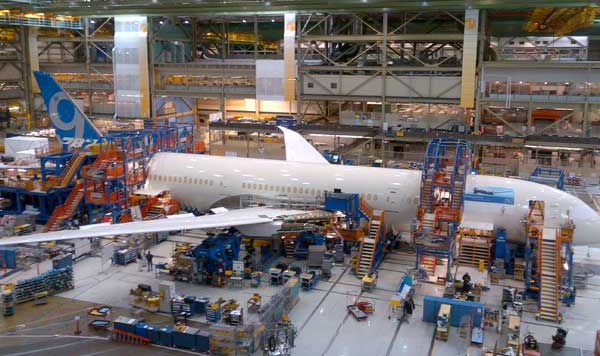 Boeing today announced it is establishing new centers for engineering design, propulsion and out-of-production airplane support for Commercial Airplanes as it continues to lay the foundation for increased competitiveness and profitable growth in its second century.

In a related strategic move, Boeing Commercial Airplanes is establishing a propulsion operation in South Carolina to enhance the performance of future airplanes, beginning with the 737 MAX.

The new centers will add internal capability and capacity in both engineering and propulsion as the company scales up to meet unprecedented demand for commercial airplanes and services. Boeing is forecasting strong growth in commercial aviation over the next 20 years, and a market for 34,000 new airplanes estimated at $4.5 trillion. The services market is estimated at $2.4 trillion.

“Our opportunity for future growth is unprecedented and this helps us be more competitive by building on our team’s talent and capability – across Boeing, the United States and around the world,” said Mike Delaney, Boeing Commercial Airplanes vice president of Engineering. “With these changes, we are structuring Boeing’s engineering operations to support that growth, reduce business risks and to consistently provide the products and services our customers expect.”

Boeing’s new propulsion operation in South Carolina is part of “a thoughtful, disciplined approach to building our capability and capacity in integrated propulsion system design,” said Nicole Piasecki, vice president and general manager of Boeing Commercial Airplanes Propulsion Systems Division. “We intend to be the industry leader in this area. The Propulsion South Carolina team will begin with the design and assembly of the 737 MAX engine nacelle inlet and expand strategically on future airplane programs.” That work is performed by a supplier on the Next-Generation 737.

“As we look to the future, we believe that innovative propulsion-system designs are needed to capture the benefits of new, more powerful and efficient engines,” Piasecki said.

Boeing also is exploring development of a design center in Kiev, Ukraine to support the Boeing Design Center in Moscow, Russia.