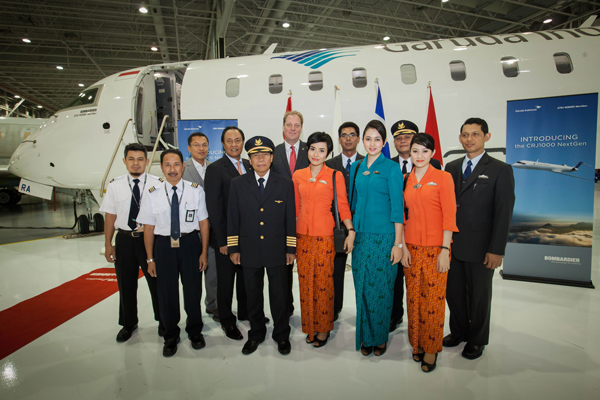 “The CRJ1000 NextGen aircraft has already established a reputation for superior economics, outstanding fuel economy and better passenger comfort, which position it as the right airliner for our network expansion and new service to growth markets,” said Emirsyah Satar, President and Chief Executive Officer, Garuda Indonesia. “We are pleased to add it to our fleet and to be the first carrier to introduce the aircraft to the Asia-Pacific region.”

“The Asia-Pacific region represents a key market for Bombardier. Growing hubs and cities in the region, such as in Indonesia, are expected to become gateways for opening new routes in the very near future,” said Torbjorn Karlsson, Vice President, Asia-Pacifc Sales, Bombardier Commercial Aircraft. “We are thrilled to see the CRJ1000 NextGen airliner coming to the region and setting the pace in efficient service to growth markets centred around emerging city pairs.

“We place great value on our new relationship with Garuda and trust that it will continue growing and be long-lasting,” added Mr. Karlsson.