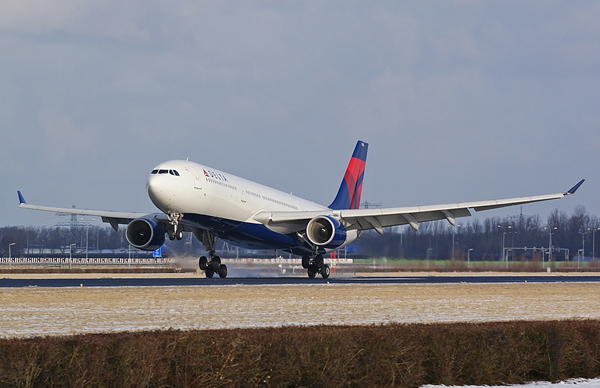 Air Lines, the Port Authority of New York and New Jersey and JFK International Air Terminal LLC (JFKIAT) will continue expansion at John F. Kennedy International Airport with a $175 million project that will add 11 gates and 75,000 square feet to Terminal 4’s Concourse B. Delta has committed an additional $5 million for information technology enhancements. The new project is in addition to the previously announced $1.2 billion redevelopment at Terminal 4 set to open in May.

“This additional expansion project at Terminal 4 is another in a long line of substantial investments we are making in New York,” said Richard Anderson, Delta’s chief executive officer. “As we continue to bring benefits to Delta people, Delta customers and the citizens of New York with significant enhancements to our JFK hub, we are thankful to have great entities to partner with including the Port Authority of New York and New Jersey, JFKIAT and Schiphol Group.”

“This continued expansion project will improve New York’s infrastructure and make JFK Terminal 4 a world class facility to serve New Yorkers and visitors,” Governor Cuomo said. “This investment by Delta, the Port Authority of New York and New Jersey, JFKIAT and Schiphol Group will provide a boost for the local economy and create jobs for the community. As a major gateway to New York, JFK Terminal 4 will be a major asset in the State’s efforts to increase tourism in the Empire State.”

“Delta’s numerous investments in New York, including the expansion of Terminal 4, are key to strengthening our economy and maintaining New York City’s position as a top tourist destination,” said New York City Mayor Michael Bloomberg. “The jobs that result from this continued expansion are important to our city and its economy.”

“Schiphol Group is proud to play an important role in supporting our partner Delta through this exciting expansion project at JFK,” said Jos Nijhuis, CEO Schiphol Group “And we are encouraged that the relationship continues to grow.”

With the new expansion, Terminal 4’s Concourse B will house 27 Delta gates and completely replace Delta’s current Terminal 2 regional jet operation. Each of the new gates will feature a dedicated boarding counter, seating area and jet bridge, eliminating the need for ramp level boarding, which currently exists at Terminal 2. All gates will be designed to accommodate two-class regional jets as well as provide flexibility for gating additional mainline aircraft.

The expanded Terminal 4 – which has been successfully managed by JFKIAT for more than a decade – will replace the outdated Terminal 3 facilities, improving the customer experience for the 11 million passengers Delta serves at JFK annually. Demolition of Terminal 3 is expected to be completed by summer 2015. The Terminal 3 site will then be used for aircraft parking.

“The approval of the second phase of the expansion project is a boon to Terminal 4 and its partnership with Delta,” according to Alain Maca, president of JFKIAT. “This will enable the continuity of this significant project as we continue to build for a better and bigger tomorrow.”

Once the new Terminal 4 opens in May, Delta will more than double the current shuttle bus operation for passengers connecting between Terminals 2 and 4. Ten buses will carry connecting passengers between the existing bus holdrooms in Terminals 2 and 4. By September 2013, Delta will open a new 8,000 square-foot bus holdroom facility adjacent to gate B20.

Delta is New York City’s largest and fastest growing carrier, providing service to more destinations from New York than any other airline. Last year Delta launched the largest expansion at New York’s LaGuardia Airport in over 40 years and is investing more than $160 million to expand and update Terminals C and D. Delta’s operation at the three metropolitan area airports carried 20.8 million domestic and international passengers in 2011, and that number grew to 23.1 million in 2012. Delta and its nearly 8,000 New York-based employees are part of the fabric of the New York community, acting as the official airline of the Yankees, Mets, Knicks, Rangers, Madison Square Garden, Food Bank for New York City, New York Wine and Food and AmFar among many others.