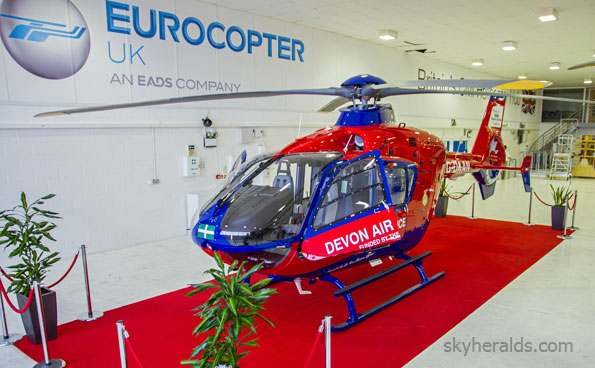 Devon Air Ambulance has added a second Eurocopter EC135 to its helicopter fleet, enhancing the service provider’s own airlift capabilities and further fostering the market presence of this rotorcraft type in medical missions throughout the United Kingdom.

The EC135 P2i version of Eurocopter’s twin-engine workhorse helicopter family was delivered by the Eurocopter UK subsidiary, and performed a five-day tour through Devon – thanking the public for funds raised in line with the country’s guiding principle to use private donations in financing air ambulances within the emergency medical service system.

It joins an EC135 T2 previously acquired by the Devon Air Ambulance Trust – both of which are fully owned by the Exeter-based charity.

“Our new helicopter is a very special air ambulance with many tailored design features that were only made possible by the superb collaboration and understanding between our staff and Eurocopter,” said Heléna Holt, the Devon Air Ambulance Trust’s Chief Executive. “Owning both our helicopters is the culmination of many years of planning and fundraising, but it has all been very worthwhile – as we are not only saving considerable sums of money, but are able to continue improving our service to the people of Devon.”

Eurocopter EC135s perform more than 15,000 missions annually with critically ill patients across the U.K., being the helicopter of choice for the country’s emergency air medical services. The EC135 P2i version acquired by the Devon Air Ambulance Trust incorporate enhancements that include software and hardware upgrades, with improvements in payload and performance capabilities.

“The Devon Air Ambulance Trust represents the trend among U.K. emergency medical services operators in changing over from leasing solutions to the more cost-effective ownership business model,” explained Markus Steinke, the Managing Director of Eurocopter UK. “Using our Britian’s helicopter hub in Oxford, we are is ready to accompany all of our customers’ evolving business models with innovative solutions.”