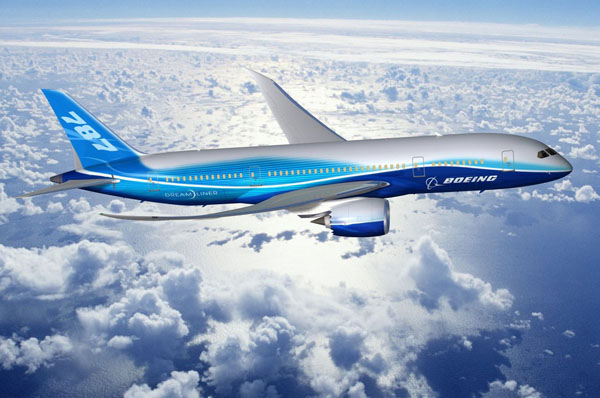 The airplane, the first of eight 787s Thomson Airways has on order, is the first to be delivered to a UK airline.

“After much anticipation, we are very excited to welcome the 787 Dreamliner to our fleet and as the first airline in the UK, hope our customers will enjoy the unique experience of this revolutionary aircraft,” said Browne. “The extended flying range of the Dreamliner also unlocks a host of new and exciting holiday options for our customers, increasing the range of long-haul destinations available with Thomson Airways from four UK airports. Customers will be amazed at the unique look, feel and service – all of which will ensure the unique Thomson holiday experience starts as soon as they step on board this fabulous new aircraft.”

“Today’s 787 delivery represents a very significant milestone in the ongoing partnership between Boeing and Thomson Airways,” said Nelp. “Thomson becomes the first UK airline to operate the 787, the most technologically advanced and fuel efficient commercial jetliner ever built. Thomson’s passengers will experience unparalleled levels of comfort with the 787’s improved lighting, bigger windows, larger overhead bins, lower cabin altitude and enhanced ventilation systems. This delivery marks the next chapter in history for both Thomson and the UK aviation industry.”

The 787 Dreamliner is composed of light-weight composites and features numerous systems, engine and aerodynamic advancements, making it more efficient to operate compared with its competition. It is the first mid-sized airplane capable of flying long-range routes, providing airlines with unprecedented fuel economy and low operating costs and enabling airlines to open new, non-stop routes preferred by passengers.

On July 8, Thomson’s first long-haul Dreamliner flights will operate from Manchester to Florida and Glasgow to Cancun. Thomson will also operate services from London Gatwick and East Midlands airports. Later this year, the airline will introduce direct flights to Phuket, Thailand from the UK.

The Thomson 787 Dreamliner will carry 291 passengers and is configured with 47 seats in the airline’s Premium Club cabin and 244 seats in the Economy Club cabin.

Thomson Airways is part of the TUI Travel PLC and is the UK’s third largest airline operating 58 aircraft.