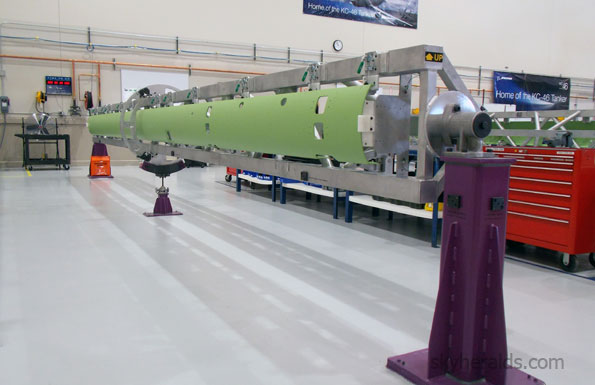 Boeing workers in Seattle took another step toward delivering next-generation aerial refueling capability to the U.S. Air Force today when they began assembling the second refueling boom for the KC-46A Tanker program.

Based on the Boeing 767 commercial airplane, the KC-46A will feature a modernized fly-by-wire boom and hose and drogue systems, making it capable of refueling any U.S. or allied fixed wing aircraft any time on any mission. What’s more, the KC-46 itself can be refueled in flight, adding to its substantially greater capability and mission flexibility.

“Our team is achieving significant milestones as we prepare for flight tests to begin, and we remain focused on delivering this capability on schedule,” said Maureen Dougherty, KC-46 vice president and program manager. “The KC-46 boom is modeled after the proven KC-10 boom, which has performed extremely well in its 30 years of operation. We’re enhancing its reliability, making it even better.”

Five test booms are being built. The first will be used for risk-reducing laboratory tests that are scheduled to begin early next year. The second will be installed on a test aircraft to further evaluate the design.

Boeing invented the air refueling boom and has been building, upgrading and modifying them for more than 60 years. The company remains on plan to deliver the initial 18 combat-ready KC-46As by 2017. It will deliver 179 to the Air Force by 2027