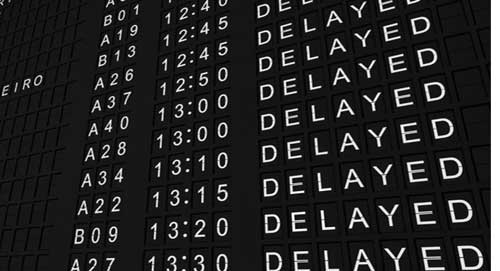 We’ve all been frustrated by long flight delays, but in some cases all you can do is laugh. Few would believe the delays in refund.me`s top 5 were not “extraordinary circumstances”; but otherwise, refund.me, the ‘no win, no fee’ online platform and mobile app, can help passengers claim up to €600 for a now-reduced fee of 15% plus VAT.

In 1982, Larry Walters, or ‘Lawnchair Larry’ as he came to be known, attached 45 helium weather balloons to his patio chair, packing sandwiches and beer and a pellet gun he would use to shoot balloons when the time came to land. Flying at 15,000 feet, he began to drift into the controlled airspace of Los Angeles International Airport and caused a number of flight delays. Eventually, ‘Lawnchair Larry’ shot some balloons with his pellet gun and lowered himself, but not before getting tangled in electric cables and causing a 20-minute blackout in a Long Beach neighbourhood. When he touched down, he was greeted by authorities waiting to arrest him.

More News: Have you booked your tickets for Walt Disney World?

While waiting for his flight to depart from Las Vegas, a passenger tried his luck at the slot machines, where he won some $350,000 and subsequently lost all interest in his flight. The airline was forced to search for his luggage and remove it from the aircraft, and after a considerable delay, the rest of the passengers finally took off while he stayed back with his winnings.

Last month, a swarm of bees invaded a tug at Charlotte Douglas International Airport, causing a boarded plane to be delayed for almost three hours as the panicked ground crew scrambled to find a beekeeper. The tug and plane were eventually declared “bee-free”, but that did not take the sting out of the long delay.

Late last year, a Westjet flight out of Calgary was delayed for over an hour after two passengers got into a vocal argument over their shared armrest. As the two men got more and more agitated, the pilot really did “turn this plane around”, returning to the gate to boot the two passengers off the plane. They were not charged and were eventually re-booked on later flights.

It’s not only passengers that can cause a plane to be delayed because of an altercation. In October of last year, a New York to Washington, D.C. flight was delayed for nearly four hours after two flight attendants got into a loud argument on the plane taxiing to takeoff. The pilot made the decision to return to the gate, judging the two flight attendants could not work together for even the one-hour flight to D.C. Meanwhile, passengers were forced to wait for a replacement crew for four hours.