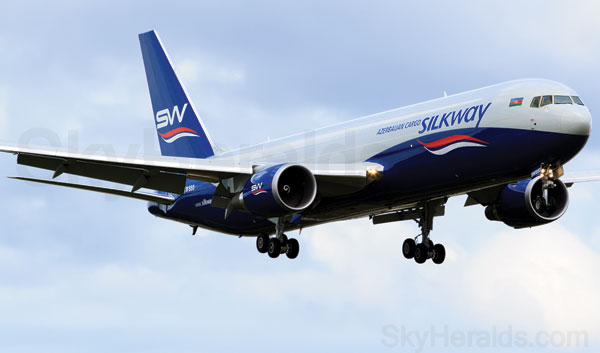 “Silk Way Airlines’ vision is to be a successful and profitable cargo operator by investing in its fleet and services and continuing to increase its regional and international footprint,” said Zaur Akhundov, president, SW Holding, parent company of Silk Way Airlines. “The order for two Boeing 747-8 Freighters is a move in that direction.”

More: Hawaiian #1 for On-Time Performance in May

Silk Way Airlines currently operates Boeing 747-400 Freighters and 767-300 Freighters. It is considered as one of the leading cargo airlines in Central Asia providing full-fledged services to Europe and the United Kingdom and the Middle East, as well as the Far East including Korea, China and Hong Kong. In addition, it also serves international destinations through a network of alliances.

“One of the goals of the Azerbaijani government is to continue building Baku’s strategic positioning as a trade hub,” said Jahangir Askerov, president, Azerbaijan Airlines, and architect of the country’s present day civil aviation industry. “The addition of the new Boeing 747-8 Freighters will enable Silk Way Airlines to expand its operations and help the government achieve its objective.”

“We are pleased that Silk Way Airlines has selected the 747-8 Freighters to serve some of the world’s high growth markets,” said Marty Bentrott, vice president for Sales, Boeing Commercial Airplanes, Middle East, Russia, and Central Asia. “The 747-8 Freighter is the most efficient large freighter in the air and carries with it the 747 family’s legacy of leadership in the air-cargo sector.”

The new 747-8 Freighter gives cargo operators the lowest operating costs and best economics of any large freighter airplane while providing enhanced environmental performance. It is optimized to provide greater revenue cargo-carrying capability than the 747-400, offering 16 percent more cargo volume while keeping its iconic nose door. With more than 150,000 hours in service, the 747-8 Freighters are achieving performance milestones with customers reporting 1 percent better fuel burn than expected. To date, Boeing has delivered 36 747-8 Freighters.