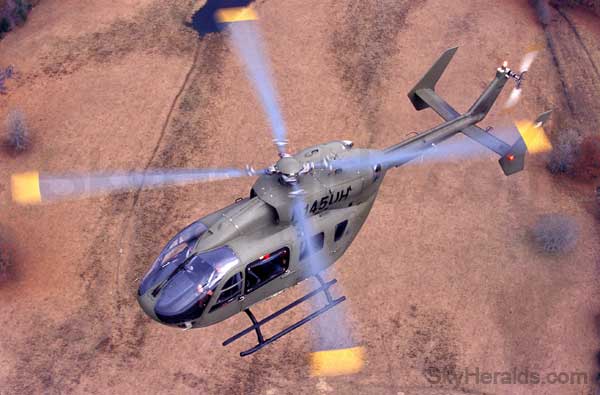 Eurocopter and the German Federal Ministry of Defense today signed a contract for 15 EC645 T2 Light Utility Helicopters (LUH) to be used by Kommando Spezialkräfte (KSK), Germany’s Special Forces Command. With this order, the Bundeswehr has now joined the customer list for the most powerful model in Eurocopter’s proven EC145 family.

The contract, worth a total of 194 million euros, includes not just the helicopters but also the related equipment packages to allow KSK to carry out its special operations missions. Deliveries of the 15 aircraft begin in late 2015 and will be completed by mid-2017.

“By selecting the EC645 T2, the Bundeswehr is setting an international benchmark,” explained Wolfgang Schoder, CEO of Eurocopter Germany, during the contract signing. “They are putting their faith in proven technologies from missions around the world. Among others, the U.S. Army successfully operates a fleet of more than 270 EC145s, the aircraft on which the EC645 T2 is based. This helicopter is an economical, low-risk and quickly available solution to carry out missions for special forces that has already won out several times against international competition.”

The LUH contract enhances the Special Forces Command’s operational capability. The day and night missions that these helicopters will perform include insertion and extraction of special ops, fire support and reconnaissance.

The EC645 T2 LUH features a modern digital cockpit with full night vision and a 4-axis autopilot. Its communication equipment including tactical radios enables interoperability among NATO forces. Special ops teams can quickly access the aircraft thanks to its spacious cabin, which has two large sliding side doors and double doors at the rear. The helicopter’s maximum take-off weight is 3.7 tons. Troop safety is improved by the Fenestron shrouded tail rotor, particularly for flight operations in confined landing sites and whenever the rotor is turning on ground.

The helicopter can be strategically airlifted in an Airbus A400M and quickly prepared for the mission upon arrival in a theater of operations.

In opting for a helicopter from Eurocopter’s EC145 family, the Bundeswehr has selected a model based on one that already performs a wide variety of missions around the world, with some 600 aircraft having been delivered to more than 40 countries. One international reference for the EC145 family’s capabilities and efficiency is the U.S. Army’s LUH program, in which the EC145, designated UH-72A Lakota, has effectively performed light utility helicopter duties since 2006. Of a total order for 322 units, more than 270 aircraft have already been delivered on time and on budget. The U.S. Army has repeatedly held the UH-72A up as an example of a successful procurement program. The EC145 has also been in operation for many years by renowned customers such as France’s Sécurité Civile and Gendarmerie Nationale, Germany’s DRF air rescue organization and the German Automobile Club (ADAC), along with many armed forces and police helicopter units around the world.

In addition, the EC645 T2 offers the Bundeswehr the potential for increased synergies: given that the German Army Aviation School in Bückeburg has for many years been using the EC135 for pilot training, Eurocopter’s family concept opens up additional benefits in training, operations and logistics for these aircraft.